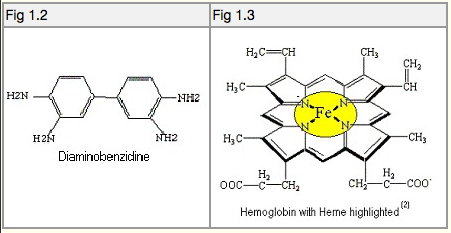 Procedure
Preparation of Working Solution
1. (Solution A) 20g 5-Sulfosalicylic Acid dissolved in 1L distilled water
2. (Solution B) 100ml 1N phosphate buffer (Ph 7.4) mixed in 800ml distilled water
3. (Solution C) 1g DAB dissolved in 100ml distilled water
4. (Working Solution) 180ml Solution B 20ml Solution C add 1ml 30% Hydrogen peroxide
Procedure of Application
1. Solution A fixation 2-3 minutes, then water rinse.
2. Tray immersion of item into working solution for 3 to 4 minutes.
-- or --
3. Filter paper saturation of working solution for 3 minutes.
4. Distilled water rinse (7)
Positive Test
TAB is a peroxidase reagent that is colourless, but when reacted with blood it undergoes an oxidation reaction, which produces the dark brown colour indicating a positive result.
Complications
TAB is a protein stain that is not specific for blood. Dye will also absorb to palmar sweat, the sweat from a human being’s hand so when used to determine if a stain is blood there is a high percentage of false positive results. Other blood enhancement coloured protein stains may be used after TAB but cyanoacrylate fuming is detrimental to TAB processing. Distilled water must be used.
Alternative Reagents?
Other options could have been Tetra methylbenzidine (T.M.B.) or Leucomalachite green (L.M.G.), both of which are very sensitive and work in a similar manner to TAB. (oxidation reaction, catalysed by the heme groups in haemoglobin, in the presence of hydrogen peroxide) (8). The Kastle-Meyer Test is another possible technique, however, no matter which reagent was used, positive results are only presumptive of the presence of blood and further analysis should have been carried out, as in steps 3 - 5 of the process outlined above.
Kastle-Meyer
We are now going to look a bit closer at one of the possible alternative techniques, the Kastle-Meyer Test. The stains were tested using the Kastle-Meyer reagent at appeal stage and stain JH2 showed a poor result for blood whilst stain JH1 showed a negative result. Dr T Clayton of the Forensic Science Service (Prosecution) stated, "Both these findings could be due to the insitu fingerprint treatment they received. Similarly, it could be that the blood was 'old' thus explaining it’s loss of biological activity or (as in the case of JH1) that it was not blood at all." (12) So, what is the Kastle-Meyer Test?
The Kastle-Meyer test got a huge start from Louis-Jacques Thenard and Christian Freidrich Schonbein. Thenard discovered hydrogen peroxide in 1818, and Schonbein developed one of the first presumptive tests in 1863 (9). This test was based on the observation that the peroxidase-like activity in haemoglobin causes oxidation of hydrogen peroxide. The result of the reaction between hydrogen peroxide and haemoglobin is the appearance of “foaming" as the oxygen bubbles rise. Shonbein reasoned that if an unknown stain foamed when hydrogen peroxide was applied to it, then that stain probably contained haemoglobin, and therefore was likely to be blood. In the early 1900’s, Dr. Kastle developed a presumptive test for haemoglobin, which used phenolphthalein as a colour indicator. A few years later, Dr. Meyer refined and improved upon this test, and this is why it is known as the Kastle-Meyer test.
Procedure
There are three reagents used as part of the Kastle-Meyer Test and they are:
1. Alcohol: Methyl or Ethyl alcohol is used to increase the sensitivity of the test. It does this by “cleaning up" the area in and around the bloodstain to better expose the haemoglobin.
2. Phenolphthalein: This is a solution that acts as a colour indicator. When prepared, the solution is boiled for several hours to help remove most of the oxygen trapped in it. It should appear as a colourless liquid. When this solution is oxidized (exposed to oxygen), it will turn pink
3. Hydrogen Peroxide: This is the 3% form typically found in chemists. Hydrogen peroxide is essentially water with an extra oxygen atom attached to it and is a chemical oxidant.
Before testing the suspect stain you should perform a test with a positive control, this can be a small swatch of cloth that is stained with dried, non-human blood. (Animal blood is used to stain the control in order to prevent the possible transmission of diseases.) A drop or two of de-ionised (D.I.) water is applied to the swab to moisten it, and then the swab is rubbed lightly against the control. Once this is done, begin applying the reagents in the following manner:
1. Alcohol: Apply a drop or two onto your swab.
2. KM: Apply a drop or two onto the swab.
At this point you should pause for a few seconds and look for any sign that the swab is beginning to develop a pink colour. This is not expected to occur when using your control, but if it is, you are seeing a false-positive reaction and should not continue further as something is interfering with the test. If no colour is seen developing, proceed with the last step, which is:
3. Hydrogen peroxide: Apply a drop or two onto the swab. You should see a pink colour develop almost immediately.
The control need only be performed once before beginning a series of tests. Thereafter, repeat the same procedure throughout testing of suspect stains (10)
How Does Kastle-Meyer Work?
Fig 1.4 below helps illustrate what happens in the KM test. 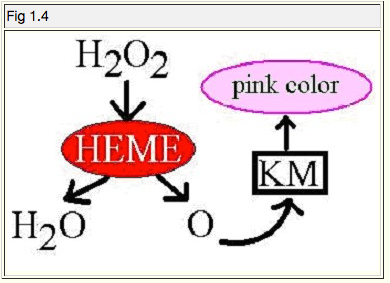 1. Hydrogen peroxide: Elemental oxygen typically comes as a pair of molecules, as it does in the peroxide, but the Heme from the suspect stain in our test breaks it up.
2. Heme: This is where we find peroxidase-like activity. This is what breaks up peroxides. Peroxides are toxic to animal tissue, and are decomposed by the heme in blood. In this case, hydrogen peroxide is decomposed into two parts: water, and free oxygen radical.
3. The free oxygen radical is going to combine with the KM, our phenolphthalein colour-indicator. This is because when the KM solution is initially prepared, it is boiled in a flask for several hours to help remove oxygen. (A little bit of zinc metal dust added to the solution helps to bind oxygen as well.) When the solution turns colourless, that means the KM has had most of its oxygen removed, and is now "oxygen hungry". So the KM is badly in need of oxygen, and there's a lonely oxygen radical floating around looking for something to bind to.
4. Pink colour: This is the blushing that occurs when the oxygen radical bonds with the KM reagent. The radical oxidizes the KM, and this oxidation causes the KM to turn pink (11)
Analysing the Results
You have used the KM test and have obtained results, but what do they mean? Table 1.0
Below is a guide to interpreting the results of the KM test (10) 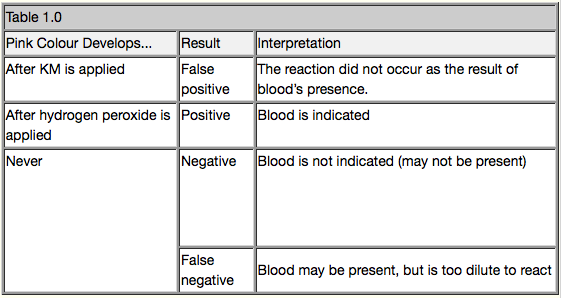 Like the actual reagents used in the Susan May case, the Kastle-Meyer test is only a presumptive test for the presence of blood. If a positive result is obtained then further confirmatory tests should be applied to the stain in order to determine if the stain is actually blood or some other substance that may also give a presumptive positive result.
Conclusions
In the Susan May case three presumptive tests were carried out, Iodine Spray, Ninhydrin Spray and the TAB test. All three gave a presumptive positive for the presence of blood. Does this mean that the stains were DEFINITELY blood? The answer to that question is no it doesn’t. Forensic scientists use presumptive tests as an easy way to eliminate possibilities. This avoids unnecessary testing of for example, powders for drugs or blood for blood group substances or DNA profiling.
A positive presumptive test is not regarded as reliable proof that the substance is what it has been tested for. This is particularly important when used in the legal domain where presumption is “an inference of the truth of a fact from other facts proved". This is NOT the scientific use of the word.
Therefore, no matter what presumptive test was used, it would normally be regarded as a preliminary test before further testing to identify the material. For blood, these further tests would include the identification of the source of the blood by blood grouping or DNA profiling. The least informative data is that it is blood, the next the species, blood group, and DNA profile in increasing order of discriminatory power in establishing a source.
In this case the TAB technique was used, ostensibly to identify the material as blood. TAB is a ‘nuclear stain’ used in histochemistry to stain the nucleus of cells. The relevance of this is that almost every cell in every plant or animal has a nucleus. Almost any biological material, including blood, would show positive by this method. This would not normally be a major problem for investigators when it is used as a preliminary test or just to show fingerprints, they would expect to do more tests to establish the material as blood. However, it cannot be regarded as specific for blood and therefore it has not been established by this test that the marks in this case were blood.
Now to the KM tests that were performed at appeal stage, not only did they give poor results (or negative in the case of stain JH1!) but also they were not performed at the time of the investigation and could not therefore have been followed up on.
As we have shown above, there is very little hard forensic evidence linking Susan May to the murder of her aunt, yet she still languishes in prison to this day. Was she guilty or innocent? Perhaps we will never know for sure but in the humble opinion of the authors of this report she deserves at least another trial. What do you think?
Bibliography
1. Taken from Case Overview on http://www.susanmay.co.uk
2. Taken from Evidence of Javaid Iqbal Hussain on http://www.susanmay.co.uk
3. Taken from Forensic Science Communications, July 1999 Volume 1 Number 2. Critical Revision of Presumptive Tests for Bloodstains - Ana Castelló Ponce and Fernando A. Verdú Pascual, Department of Legal Medicine, College of Medicine and Odontology, University of Valencia, Valencia, Spain.
4. Taken from http://www.forensictc.50megs.com/Iodinepsray.htm
5. Taken from http://www.chemistry.ccsu.edu/gladovich/teaching/472/index.html
6. Taken from http://www.cbdiai.org
7. Taken from http://www.cbdiai.org/Reagents/dab.html
8. Taken from http://www.chemed.chem.purdue.edu
9. Taken from http://www.forensicdna.com/Timeline.htm
10. Taken from http://www.geocities.com/a4n6degener8/kastle.htm
11. Taken from http://www.geocities.com/a4n6degener8/km_workings.htm
12. Taken from http://www.susanmay.co.uk/pros_trial_sci.htm

Published by Friends of Susan May on October 13th, 2018